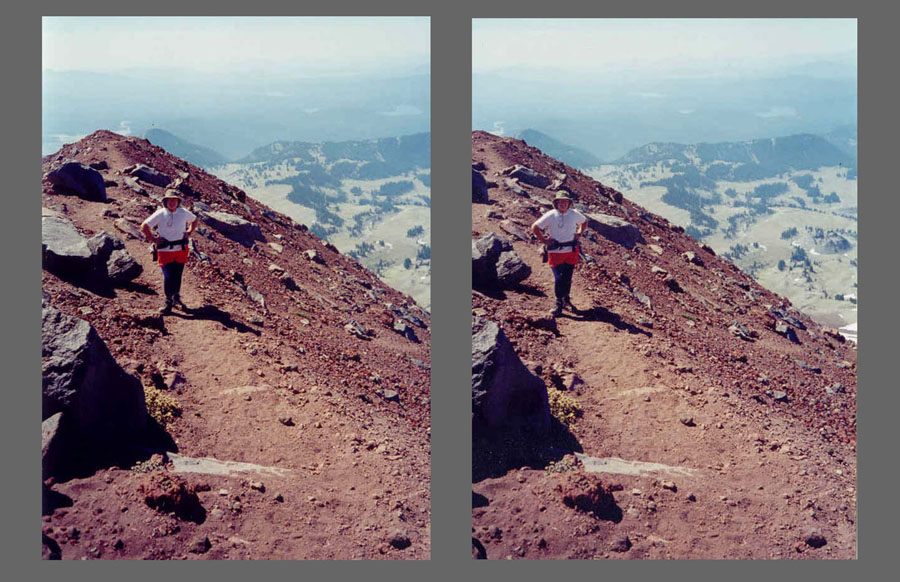 This is a cha-cha shot of my wife Ann on South Sister at about the 8500' level. The gun-sight notch in the land form just to the upper right of her head is the pass where the trail from the trail head crests the ridge and continues up the mountain to the top. The view of the mountain was taken from very near that pass. We had camped the night before near the pass so that we would have all the next day to climb to the top of South Sister and return back to camp. We anticipated a five hour trip up and back. It took twelve hours.

All stereo pairs on this climb (the local mountaineering veterans refer to it as an easy hike) were taken with either the Olympus Stylus or a Leica 3c. The Leica was used for cha-cha stereo slides. Our scanner, an HP4470c, does a good job on prints but I have yet to master scanning slides with it, so none are shown here. Scanning Kodachrome slides requires a high end scanner to capture all the detail in the slide.

If you have never climbed a mountain I highly recommend that you do so at least once before you get too old to do it. Even a small benign mountain such as South Sister (10,350') provides a whole new perspective to one's view of the earth that we live on. Late July or early August seems best for this mountain. As an added plus, no special equipment, besides good hiking shoes and a large water container, is needed.

All images of South Sister are from 3.5" x 5" color prints 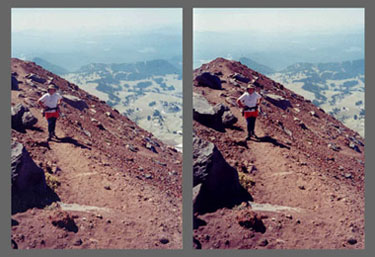