Getting the most out of a Realist 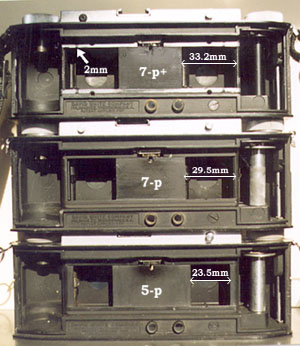 The top two cameras were converted using the 7. 5-p gears. The bottom camera is a standard unconverted 5-p Realist. Incidentally, this format can also be achieved with the somewhat kludgey non-automatic 7-p advance. The top camera was modified to produce the largest practical images that the Realist is capable of producing without drastically changing the camera body. The 70mm spacing of the Realist lenses dictates that for a 1-3-1 advance scheme, an advance of 7.5 perfs and 22. 5 perfs is required. The standard 7-p cameras (Belplasca, Verascope and FED) with a 65 mm lens spacing require a 7 (6.66?)and 20 perf advance. Theoretically, anything from pairs of 1 mm wide slits to 35 mm wide frames, whose centers are 70mm apart, are possible in the Realist using the new gears. As the frame size increases, the black non-image space on either side of a transparency frame decreases, until it disappears and the frames begins to overlap when the frames are wider than 35 mm. Since there is some slight shifting as the film feeds through the camera, I made the frame width in the top camera only 33. 2 mm. This results in 33. 3 mm wide images with no overlapping frames. There is a 1.75mm-2.25 mm space between images. This leaves little window adjustment possibilities as full frame RBT stereo mounts have 33 mm wide windows. However, the frames are milled to set the window at approximately seven feet so no lateral film chip adjustment is really necessary. I could have made the frames 34mm wide but I didn't but it doesn't seem to be a problem.

The top camera provided an opportunity to determine the limits of the Realist regarding maximum image size. This required milling the camera baffles 2mm each which increased the opening into which the aperture plate fits. I then increased the width of the aperture plate by cutting it apart and adding thin brass fillets and then finished it with epoxy. The aperture plate fits in the opening with about . 5mm side to side play. A new longer pressure plate was made. The camera has David White 2. 8 anastigmat lenses that cover the 25mm x 33. 3 mm frames at f/16-22 only. It may eventually get a set of 38mm f/2. 8 Hexanon point and shoot camera lenses but as time passes this seems less and less likely. This exercise led me to conclude that the realist with the 2. 8 lenses is a very capable design that was, in my opinion, wasted on the 5-p format. The middle camera is a standard 7-p conversion. The bottom camera is an unconverted Realist (5-p). The 5-p camera produces 29 stereo pairs on a 36 exposure roll of film while the 7-p and the 7-p+ cameras produce 20 stereo pairs on a 36 exposure roll of film. The 7-P+ is a unique beast.  Even after all this messing around, I still was not able to get it right the first time around and my image spacing on film was somewhat erratic. Then it dawned on me that, being one of the very earliest conversions, the escapement detents were cut by eye. Further examination revealed that that one of the detents was off by about one half degree or approximately .010”, and this was enough to cause the erratic spacing. I made a jig and on all later modifications the detents in my idler gears are exactly 90 (270)degrees apart. The new precision shows with 1.75mm -2.25mm inter-image blank spaces between the 33.3mm images.