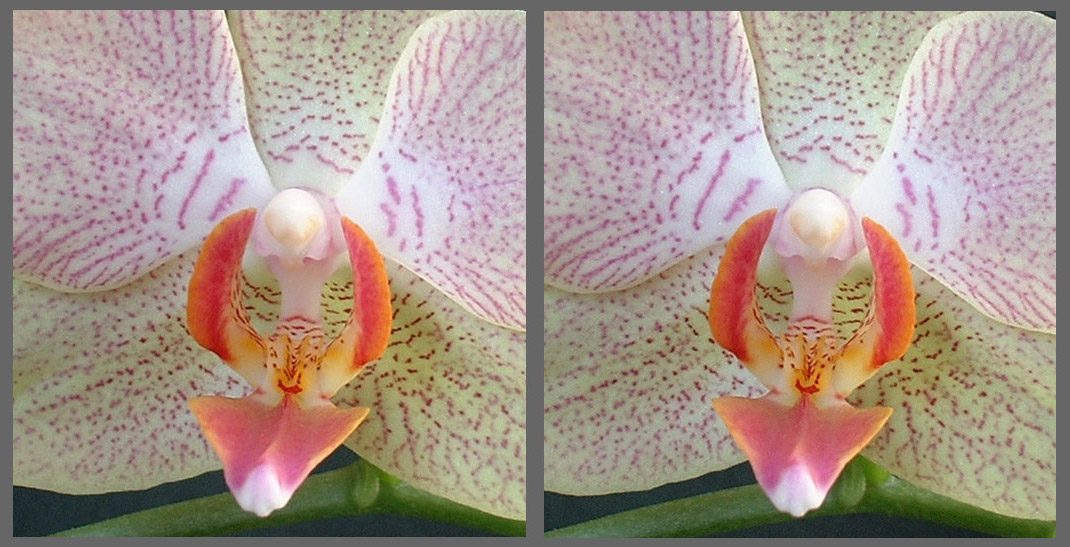 This is a digital macro image of my Phalaenopsis orchid. It was taken with a Fuji FinePix 2400 digital camera that was attached to a parallelogram swing bar that I made. The distance from the camera to the flower was approximately twelve centimeters and the stereo base was approximately nine millimeters. With a ratio of one to thirteen, the image is a bit hyper, meaning that the stereo effect is somewhat exaggerated.

For each exposure, the camera's functions were set to "macro" and the self timer was used to minimize vibration caused by depressing the shutter. The file size was set to 1600 fine. I wanted to get as much information as possible. The resulting image represents about 20% of the original image size, producing the effect of really zooming in on the flower. The first image was made with the swingbar in the left position and the second image was made with the swing bar in the right position. The image files were then transferred to a computer and sized and cropped in an image editing program. They were then uploaded to the server.

Phalaenopsis orchids are rather forgiving to grow and make splendid additions to the house since they seem to bloom in February, a time when the winter blues are just beginning to be felt. The blossoms last for up to a six weeks. This particular blossum emerged in mid January and lasted until the middle of July! The flower is approximately 2-1/4" across. 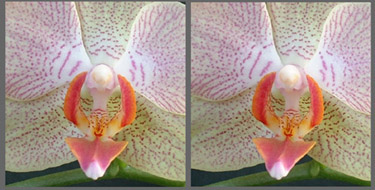