How to view a stereograph without the aid of a stereoscope or stereo viewer.

To view a stereo pair without the aid of a stereoscope or stereo viewer is relatively easy and a person has two methods to choose from. One method is called the parallel viewing method and the other is called the cross-eyed (x-eyed) viewing method. With the cross-eye method very large image pairs may be viewed. With parallel viewing you are restricted to images whose combined width is about 5-1/4" or where each element in each image is no further apart than the distance between your eyes, roughly 2-5/8", unless you can diverge your eyes somewhat, and with practice you can. With about the same amount of practice you can learn the cross-eye method. I will cover parallel viewing first. The illustrations above show the different ways of viewing. It takes practice to master either method. Use the photos to practice the two methods.

Parallel viewers should start by letting the eyes relax while looking at a stereo pair so that the eyes will naturally want to point straight ahead. As they begin to point straight ahead, the eyes will be pointing at their respective images. As the eyes relax you should notice similar objects in each of the pairs moving toward each other until they overlap each other. When the images overlap completely, you will become aware of three side by side images. The center one will be in stereo. Placing a sheet of cardboard or any other stiff piece of paper, acting as a separator, vertically between the images sometimes helps beginners. The most important thing to remember is that similar objects in each image must be on the same level. Use the small orchid image below to practice on.

To assist you in learning to view cross-eyed, I have made two cross-eye images, one smaller and one larger. Practice on the smaller pair, located below, first. The larger image is in the image gallery.

Cross eye viewers should start by lining up the nose with the imaginary line between the left and right images. While looking at the stereo pair, bring your finger tip just in front of your nose and slowly begin to focus on your finger tip while still trying to stay focused on the stereo pair. Attempting to focus on your finger tip should cause your eyes to cross. You should see the two images begin to spread apart with a third image trying to occupy the center area between them. Next, try to concentrate on the images so that they are in sharp focus. When the two outer images spread far enough away from each other, the center image should pop into focus as a stereoscopic image. Cross the eyes just enough to see three distinct images. The one in the middle will be in stereo. The object is to quickly switch the focus from the finger tip to the center image in the background while maintaining the eyes in the crossed position. Concentrate on that central image and try keeping the images fused for a while to sort of train your eyes into thinking that being crossed is OK. As in parallel viewing, make certain that similar objects in each of the pictures are aligned horizontally. This cross-eye view is small to make it easier to learn the cross-eye technique. Don't worry, if I can do it, you can do it. 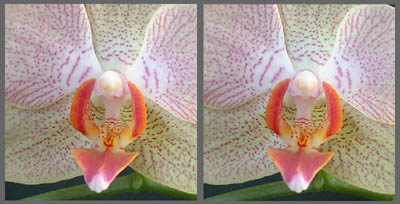 Have fun and good luck. Do not become discouraged if your first efforts fail. The rewards are worth the effort to learn how to free view using both methods.